The field of computer engineering is at the interface between hardware and software and seeks to balance the tension between application requirements and technology constraints. This lab includes four parts that should enable you to appreciate how hardware and software come together to create a complete Internet-of-Things (IoT) system. The following figure illustrates the high-level template for such an IoT system.

The final IoT system will work as follows: (1) the IoT input device will monitor the environment for motion, and when it senses some kind of motion it will send a message to the IoT cloud; (2) the IoT cloud will relay this message to the IoT output device; and (3) the IoT output device will trigger the LED to turn on. This IoT system is a simple example of emerging “smart homes” where various input and devices work together through the cloud to automate daily tasks and (hopefully) improve the overall quality of our lives.

We will use an incremental process to building this IoT system. First, we will divide each group of four students into two sub-groups with two students each. One sub-group will focus on building the IoT input device and the other sub-group will focus on building the IoT output device. Each sub-group will start by just building a very basic non-internet-connected device that uses an LED and the ultrasonic rangefinder. The sub-groups will then experiment with either connecting the input (i.e., ultrasonic rangefinder) or the output (i.e., LED) to the cloud. Then the sub-groups will come together to combine the IoT input device with the IoT output device to create the complete IoT system.

Take a look at the materials on the lab bench which you will be using to complete the lab. Make sure you can identify all of the materials before continuing. 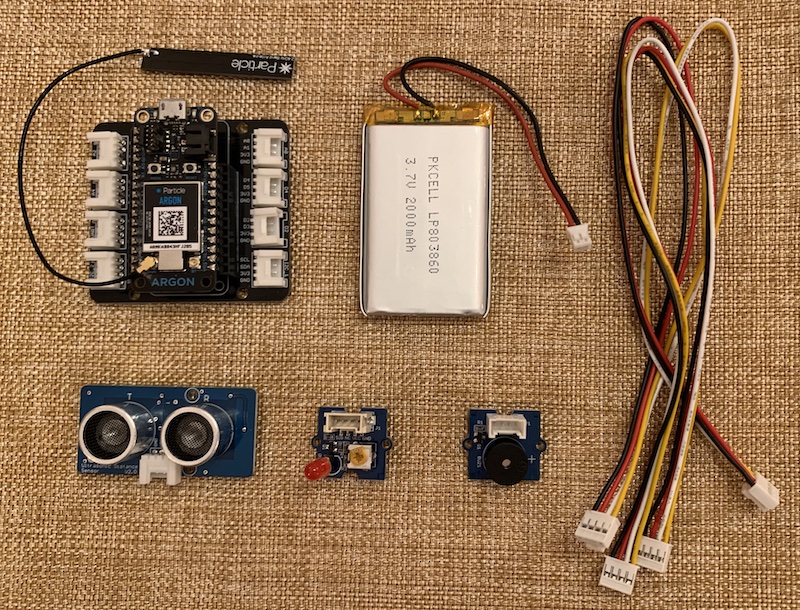 Take a closer look at the Particle Argon board. Notice that there are eight white connectors that can be used to connect the input and output modules. There is an LED on top of the Particle Argon that shows the status of the device. It should be breathing a calming cyan to indicate that the board is connected to the cloud and operating normally.

We will be using the web-based Particle IDE to program your Particle Argon. Go to this link on your laptop:

You should not create a new account. You should login with your group username and password. The following figure labels the key icons on the left-hand side of the Particle development environment: 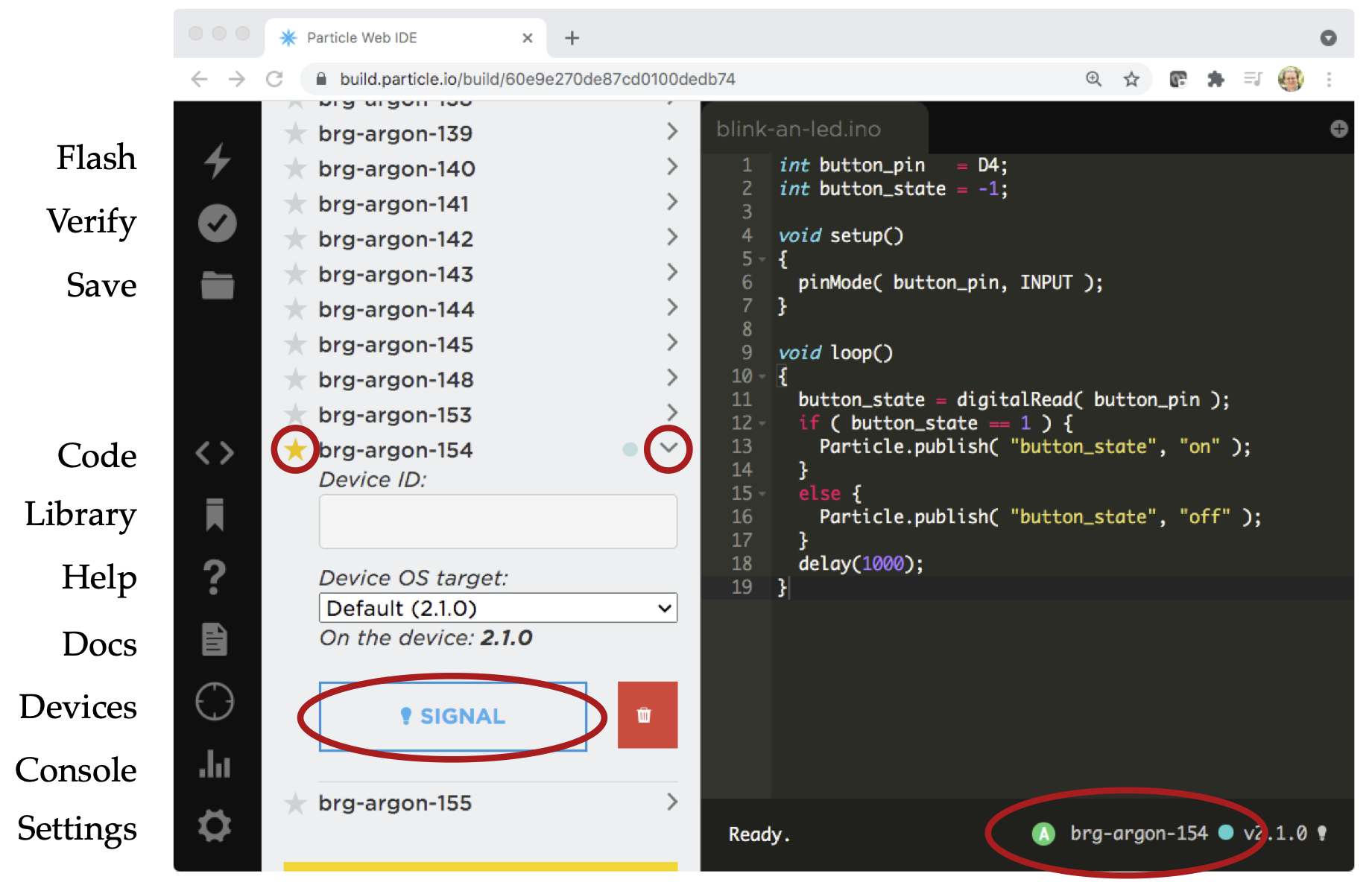 The most important icon is the flash (lightning) icon in the upper-left hand corner. Clicking this icon will cause the Particle IDE to compile your program into machine instructions and then to upload the resulting machine instructions to the Particle Argon for execution. The above figure illustrates what happens when you click on the devices icon. Note that you must select your specific device by clicking the little star next the device that matches your device number. You can always look at the bottom right-hand corner to verify that you are working on your specific device. You can click the little > to reveal the signal button. Clicking this button will cause your Particle Argon to blink rainbow colors which is a great way to confirm that your Particle Argon is connected to the internet and working.

Sign-Off Milestone: Signal your device and have an instructor verify that things are working correctly.

In this part, we will start by blinking the LED output module. An LED is a “light emitting diode”. It is a simple circuit component which lights up when current flows through it. Connect the LED output module to the D4 pin using using one of the four-wire cables. Now let’s look at the software for this first part:

Before continuing, we will try and understand each line of the program. A program consists of a sequence of statements; these statements are executed one at a time by the microcontroller to ultimately execute the program. An Particle program can be divided into three sections. The first section is where we create global names for pin assignments. The second section is the setup routine, and the third section is the loop routine. The statements in the setup routine execute only once at the very beginning of the program. The statements in the loop routine execute repeatedly over and over again.

The int led_pin = D4 statement is a variable assignment. It specifies that the variable named led_pin should be assigned the value D4. From then on, whenever we use the name led_pin it will be interpreted as the value D4. We also need to specify the “type” of this variable. In this case, the type is int which indicates that this variable will store integer values. Effectively, we are saying that the LED input module is connected to digital input D4 on the Particle Argon. The pinMode( led_pin, OUTPUT ) statement is a call to a routine which tells the Particle Argon that pin number led_pin (i.e., pin number D4) should be configured as a digital output pin.

The digitalWrite( led_pin, LOW ) statement is a call to a routine which tells the Particle Argon to write either a logic high or a logic low value to the pin number led_pin. The delay(1000) statement is a call to a routine which delays execution for one second (the argument to the routine is specified in milliseconds). These two statements turn on the LED and wait one second. The next statements turn the LED back off and wait another second. Since the statements in the loop execute over and over, this program effectively turns the LED on, then off, then on, then off, etc.

Type this program into the Particle software development environment. Click the code icon. The input group should edit the engrg1050-input program, and the output group should edit the engrg1050-output program. Once you have entered your code, then click on the flash button to download your program to Particle Argon. Be patient as this can take a few seconds. Verify that the LED blinks appropriately. Feel free to experiment with different delays to vary the blink rate.

Sign-Off Milestone: Once you have the LED blinking, have an instructor verify that things are working correctly.

Part 2. Using an Ultrasonic Rangefinder to Turn On LED

Notice that we are configuring another pin, ranger_pin, which is then used when constructing the Ultrasonic class. In the loop routine, we check if the range is less than a threshold, and if so we turn on the LED. Test out your code, and try different thresholds.

Sign-Off Milestone: Once you have the ultrasound ranger input module controlling the LED output module, have an instructor verify that things are working correctly.

Part 3a. Using an Ultrasonic Rangefinder to Send IoT Message

This part is for the IoT input sub-group. If you are in an IoT output sub-group then you should work on Part 3b. Go ahead and disconnect the LED output module. Leave the ultrasonic rangefinder input module connected to the Particle Argon. In this part, you will work on sending an IoT message to the cloud when the ultrasonic rangefinder detects something is closer than a certain threshold. Modify the code from Part 2 to use the Particle.publish function to send an IoT message like this:

The Particle.publish function will send a message named “alarm” and the message data is either “on” or “off” depending on whether we want to the alarm on the output device to be on or off. You can verify this is working by watching the console. Click on the console button and you should see a “alarm/on” event show up every time you trigger the ultrasonic rangefinder.

Sign-Off Milestone: Once you have verified that your IoT input device is able to send messages to the IoT cloud, show an instructor by using the console.

Part 3b. Using an IoT Message to Turn on LED

This part is for the IoT output sub-group. If you are in an IoT input sub-group then you should work on Part 3a. Go ahead and disconnect the ultrasonic rangefinder input module. Leave the LED output module connected to the Particle Argon. In this part, you will work on receiving an IoT message to turn on and off the LED output module. Modify the code from Part 2 to use the Particle.subscribe function to receive an IoT message like this:

Sign-Off Milestone: Before downloading your code to the Particle Argon board, have an instructor verify it is correct.

Part 5. Putting Together the IoT System

Put your IoT input and output devices into the small enclosures. Use some blue tape to attache the input/output modules to your device. Position the ultrasonic rangefinder on the side of the enclosure.

Now place your IoT input device in the hallway to see if you can detect students passing outside!

Sign-Off Milestone: Have an instructor verify the whole system works.